Maples in the Mist 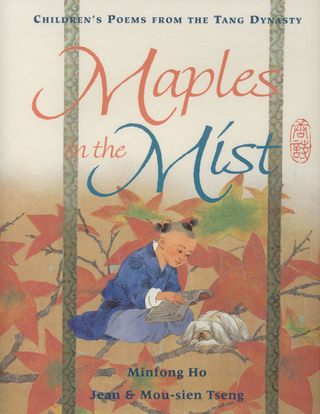 Amazon.com
The Tang Dynasty (618-907 A.D.) is often referred to as the Golden Age of China. Poems from that era are widely considered the finest classical poems in China's 2000 year history. Translator Minfong Ho has assembled a collection of simple poems which were traditionally taught to children and will certainly give young readers images to ponder, as in Moon: When I was little/I thought the moon was a white jade plate,/Or maybe a mirror in Heaven/Flying through the blue clouds. Exquisite illustrations by Jean and Mou-sien Tseng not only illuminate the poems but serve as a lovely introduction to another culture's history. For all ages.

From School Library Journal
Grade 3 Up?A beautiful anthology of 16 short, unrhymed poems written 1000 years ago in China. Although the poems Ho has chosen reflect timeless themes and her translations are fresh and informal, most are too introspective for a young Western audience. An attentive fourth-grader might relate to "On the Pond," in which two boys foolishly leave a trail betraying their mischief, or "Goose," a straightforward observation of a paddling goose, humorously illustrated. But the metaphoric images of a rainstorm en route to ancestors' gravesites, an empty boat tossed in a twilight storm, birds in flight against the vastness of time and space, and even homesickness ("How can a blade of young grass/ever repay the warmth of the spring sun?") seem a bit sophisticated for pre-teens. In her introduction, Ho admits she memorized these poems reluctantly in childhood, coming to appreciate them only years later. Even young children, however, will enjoy the illustrations that complement the lean, moody text. The Tsengs' watercolors are reminiscent of traditional T'ang brush-paintings. Stylized contours of huts and pagodas, birds, blossoms, and children in ancient dress are set in airy, expressive washes of landscape, spring or autumn foliage, and mountains floating in the mist. Chinese characters printed in the right and left margins of each page are offered, unfortunately, without explanation. The three-page appendix, "About the Poets," is a useful lead-in to further research on the 14 men and their work.?Karen L. MacDonald, Fairmount Public Library, Sandwich, MA
Copyright 1996 Reed Business Information, Inc.

From Booklist
Age 5 and up. Just as American children learn Mother Goose rhymes, Chinese children may learn poems from the Tang Dynasty (AD 618^-907); 16 poems from that period, considered China's golden age, are here translated into contemporary English. The book is an exquisite blending of Chinese thought as expressed through the concise wording of Tang poetry and the beauty of Chinese-style brushwork in 16 resplendent watercolors. Initial poems address the concerns of young ones at an age to be measured against a little pine tree, which "the more I watch it, the slower it grows." Others are more contemplative, better suited for older readers. The illustrations include eight double-page spreads with major motifs of traditional Chinese paintings, such as the pine tree and crane. Each painting is marked with a customary red stamp; but rather than being traditionally monochromatic, the art throughout has a Western sense of color. Each poem's roots are reinforced through the creative layout, which uses the outer margins of each page to present the Chinese character writing for the book's title, author's name, poem's title, and entire poem. Attention to detail within the illustrations includes period clothing, toys, and hair styles. Older readers studying China may find the book useful for its detailed historical information about the poets and their times. The notes also include a sense of how the poems came to be created. Karen Morgan

From Kirkus Reviews
A collection of tiny poems set against watercolors painted in the Chinese tradition. These Tang Dynasty poems, translated from the Chinese, were traditionally memorized by children learning to read. Ho (Hush!, p. 227) tells readers in the brief, intimate introduction how the book grew out of her desire to pass these vivid four-line verses on to her own children. The poems are immediate and accessible: ``When I was little/I thought the moon was a white jade plate,/Or maybe a mirror in Heaven/Flying through blue clouds.'' In ``News of Home,'' the poet asks, ``The day you left, was the plum tree/By my window in bloom yet?'' The sound of a bell at night, the snow-white hair on an old man, frosted leaves ``redder than spring blossoms''-- these seemingly artless images compress a depth of feeling nicely reflected in the pictures. The dreamlike world of recognition and memory in the watercolors is firmly yoked to the images in the poems. More mature poetry fans will recognize many of the names here; an ``About the Poets'' section offers brief biographies. (Picture book/poetry. 6-9) -- Copyright ©1996, Kirkus Associates, LP. All rights reserved.

Ingram
Chinese children have always learned to read by memorizing poetry, and the poems of the Tang Dynasty (618-907 A.D.) are widely accepted as the best classic poems in China's 2000-year literary history. "A treasure." Full-color illustrations.

Card catalog description
A collection of short poems written over 1000 years ago by such poets of the Tang Dynasty as Li Po, Yin Luan, and Du Mu.